2. Some chocolate and the first series produced items

During 1979, MJK received a significant order of control panels. The order made MJK change technology, from classic relays to electronic circuits, saving space and at the same time a necessary step towards creating more modern products.

Jens Kruse saw the potential in hiring a radio R&D engineer, Ivan Griese. Ivan had great experience in working with VHF/UHF radios, primarily for emergency vehicles. Some were used more or less as mobile phones, perhaps most importantly was Ivans experience in developing electronic circuit boards.

Ivan remembers: “The early days gave us some odd jobs, we did the control of a chocolate machine at Toblerone in Switzerland. We controlled the dosage for the molds and that was one of the few assignment I ever had, where I needed a lot of taste samples… We had a lot of automation jobs, but it didn’t take long before we specialized within the water industry”, Ivan sums up. “We did, as far as I know, the first computer controlled monitoring system in Denmark in 1981. It was for Aabybro [Northern Jutland], and constructed using an Apple II it had 8KB of memory, which was expanded to a whopping 64KB!!! We had a true pioneer experience on those projects, but the monitoring system for Aabybro proved that we had a future within monitoring, analysis and control within the water industry.

The first years, MJK merely created individually designed solutions. Analysis instruments were bought from 3rd party producers. A fail delivery gave birth to the idea of producing true MJK products. “We could make better products, and at the same time we controlled our delivery situation ourselves. It was way better.” Jens Kruse underlines.

MJK 751 and 752 were the first own-produced products MJK marketed in the early 80’s. A combined pH and temperature transmitter, the models are actually still working on a few waste water plants today.

See the story as PDF 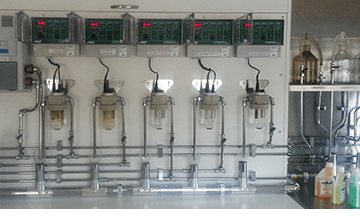