High Level In the Wadden Sea

Expert hydro-static pressure transmitters have now sold 100.000+ world-wide. They are installed with ceramic or steel membrane, but it didn’t start like that.

In 1981, the Margrethe Kog levee was constructed in the south-western part of Jutland, creating 11km2 wetlands with a 2km2 saltwater lake. MJK created the complete pump control solution. Placed in the now UNESCO world heritage area Wadden Sea, meant that it is possible to pump water into the wetlands on high tide, thereby maintaining the important wildlife area.

Pressure transmitters were crucial to the pump control. Together with Jens Kruse, Ivan Griese developed a transmitter, that measured the hydro-static pressure via a rubber membrane; the first MJK Expert was created.

Today, Ivan Griese is an R&D consultant at MJK. He recalls the days like this: ”Actually, the rubber membranes were incredibly durable. They were pretty hard to produce, but we managed to assemble what we needed for the job and drove there – this was a big deal for us. We mounted the panels in wells 2-300 meters into the Wadden Sea and could only work on the well on low tide. We had DEMA [emergency agency] watching from the coast for emergency rescue, as the tide is very fast. Several times, we ran from the tide when it got dangerous. We had to pull our technician out of the well the second he finished service. We sealed the well when the water rose, then we ran and got back safely.

The rubber membranes showed a surprising durability. At one point, I saw one that had been working for more than 20 years before we changed it to a modern transmitter. They did need cleaning and was often treated pretty harshly when cleaned and they could handle it. Two years later, we introduced the first transmitters with steel membrane - we added the protective grid on them and later came the ceramic membranes which are great for harsh environments.” Ivan explains. 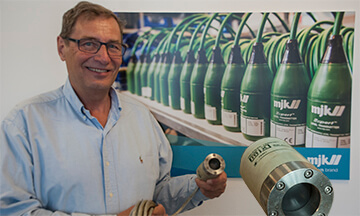