Today, only a few remembers MJK 251-1, but in 1983 MJK won a significant order from a local beach park. MJK delivered the complete pump control and monitoring system for around 20 pump stations in the area.

In the late 70’s, early 80’s, controls for pump stations were not very reliable, not at all standardized and they were absolutely no match for the current controls. MJK noted, that the Danish market potential was around 10.000 pump stations just on waste water. As MJK succeeded in selling the MJK 251 to several counties, they realized that a universal pump control was what MJK needed to make a leap into the waste water business for real.

Founder Jens Kruse explains, “We considered creating a universal pump control for some time. Most of the jobs were, however too specialized for us to “recycle” our engineering from one job to the next. We knew that, if we wanted a larger company we had to export; Denmark was a great market but we needed a larger market to expand from the 6-8 people, we were at the time. In many ways, we started the long journey with the decision of following the 251 with a universal solution.”

Now MJK created the well-known 703 pump control. It became one of our most significant products the next 25 years. 703 was reliable and very simple to control, it became a great success in Denmark and in various countries mostly in Europe.

Having universal products changed MJK from the order producing company to an international export company. Expansion came faster than expected due to the great products. MJK began to participate in trade-shows in the neighboring countries and shortly after that the first local dealers helped MJK flourish.

Read the story as PDF 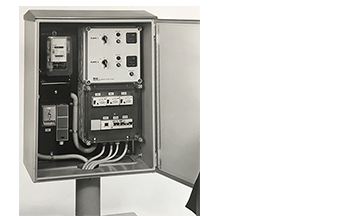