A talent to trust

In 1985, the newly educated electrician Kaj Jyde had been working at a factory for a couple months when he was contacted by Jens Kruse.

Kruse had asked at the electrician school if they could recommend “someone way above average”? They told him to call Kaj. It only took one meeting to make Kaj switch to MJK, “Do you want to do automation, build panels and travel?”

For the 22 year old electrician, an adventure packed with trust and credibility started that day. “My first day, I was told to start building panels. I must have done well, because two weeks later, Jens asked me to go to New York for a couple of months on my own … NEW YORK! I was excited and a bit nervous.” In New York, Kaj prepared the complete PLC automation of the production line of a chocolate factory. Jens Kruse participated the last few days and when they left, everything was running smoothly. Next assignment was a waste water application in a small Danish town on Fuenen. For Kaj, it was fun every time he experienced something new.

One day in 1987, Kaj returned from a service visit with a small sales order and he liked it. ”I asked Jens to be allowed to sell. He replied that I could become responsible for sales in Denmark… "That’s the kind of trust I have been shown and that’s what makes you want to give all you got”. Kaj's new position also earned him his first company car, an Opel Kadett 1.6S.

Kaj continued travelling a lot. His insights into local conditions and solutions led to him being promoted to Product Manager in 2000. Throughout the next 12 years, Kaj was the center of world-wide launches of all new products; seminars, trade shows, dealers, end-users. Through it all, Kaj always travels "…with a screwdriver set - you never know when you’re going to mount or activate something in the field.”

In 2012, Xylem acquired MJK and a few details needed to be in place that year. Kaj had been working for MJK for 27 years, visited more than 50 countries, literally traveled around the world many times – and suddenly he was presented with his first employment contract… Kaj explains, “It was a peculiar situation because MJK was always about trust – to us, a handshake was enough, but even though I am today a Strategic Account Manager, nothing has changed in the way we are still very concerned with trustworthiness. And I am basically still doing the same job - I am disseminating knowledge about our product's abilities and quality, and I love it.” 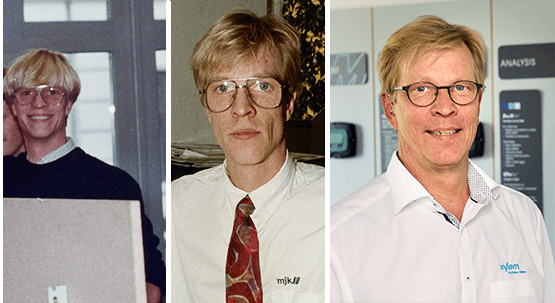