9. When MJK Became "A Xylem Brand"

MJK rose in international awareness. Not only because of the new competitive product ranges - such as electromagnetic flow meters - but also the newly established MJK USA greatly illustrated the importance of being active on the American continents.

As the American customers became aware of MJK products, several larger companies approached MJK. The owners of MJK decided to accept an offer from Xylem Inc. as they were already very well-known within the water industry. Xylem not only were experts on analysis, but also had Flygt and other pump producers which would achieve great technological benefits from implementing MJKs pump controllers.

The synergies were obvious. MJK benefitted from Xylem already having local representation on markets where MJK, at the time, were not present. Xylem could drive great benefits from implementing MJKs competitive pump controls into their enormous range of high quality pumps. Furthermore, several other products matched the range already offered by Xylem.

MJK's then CEO, Janicke Schultz-Petersen, looks back, “It was a very special feeling, that afternoon, when we announced that from that day on, the ownership of MJK was handed over from Jens Kruse, Ivan Griese and me, to Xylem Inc. Most of the talk was about the positive aspects and the opportunities of being a part of Xylem. The new ownership acknowledged the way we ran MJK and showed us great respect, both in the talks before the acquisition, but also in asking us to stay at MJK and continue at our positions for a couple of years allowing a new managing director to be found. Therefore, the handover was very smooth for us, for the company and for the many dedicated employees.” 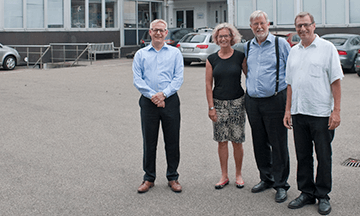